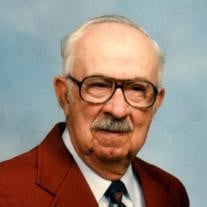 Mr. Charles E. Daniel, 91 of Elberton, entered into rest Friday, July 6, 2012 at Elbert Memorial Hospital. Charles was born in Elberton to the late Jessie Stratton and E. R. “Bud” Daniel. Charles was the beloved husband of the late Pauline Evans Daniel for 67 years. Funeral services will be held at 11:00 am Monday, July 9, 2012 from the Chapel of Hicks Funeral Home with Reverend Wayne Smith and Reverend Roy Hartley officiating. Charles was a devoted member of Elberton First United Methodist Church and was the oldest surviving member of the John Mashburn Sunday School Class. Charles was a long time shed and quarry foreman for Ross Brown Granite Company and later retired from Harper’s Quarries. Family members are a son and daughter-in-law, Martin and Ann Daniel of Newnan, GA; two grandsons, Evan Daniel of LaGrange, GA and Zakery Daniel of Hampton, GA; a sister and brother-in-law, Peggy and Leon Bryant; a sister, Juanita Marsh; brother and sister-in-law, Marshall and Minona Daniel; and many nieces and nephews, their children, and countless friends. Charles was preceded in death by an infant son, Donald Evans Daniel. The Family will receive friends Sunday, July 8, 2012 from 6:00 pm until 8:00 pm at Hicks Funeral Home and also Monday, July 9, 2012 from 10:00 am until the time of the funeral service at the funeral home. Flowers will be graciously accepted, or if so desired, memorial contributions may be made to the John Mashburn Sunday School Class of the First United Methodist Church of Elberton. Online condolences may be expressed to the family at www.hicksfuneral.com. Hicks Funeral Home is honored to be serving the Daniel family.

The family of Mr. Charles Edward Daniel created this Life Tributes page to make it easy to share your memories.

Send flowers to the Daniel family.