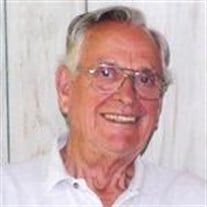 Charles Winfield Caudell, age 88, died at his Roswell home on February 25, 2018, after an extended illness. Charles, known to many as Travis, was born on the family farm in the Nails Creek community of Banks County, Georgia on May 10, 1929. He was one of four boys born to Winfield Reno and Grace Coffee Caudell. A veteran of the Korean War, he served honorably in the United States Army for over six years. Over the span of fifty years, he excelled in sales throughout the trucking industry. He received numerous awards for sales leadership and corporate achievement. He retired in 1994 as Vice President of Sales for Turbo Transport. He served through many service organizations and churches, including the Roswell Lions Club and First Baptist Church of Roswell, Georgia, where he was a deacon. Through dedication to all principles of Lions Club International, Charles received the Melvin Jones Fellow Award, the highest award granted by the global organization. He enjoyed the outdoors and was always willing to share plants and vegetables. He encouraged everyone to volunteer in the community. The world is a better place through his lifelong service to his country, to his family, and to his Christian faith. His unique and personable approach to life and mankind inspired, entertained, and improved our world. Charles was preceded in death by his loving wife of 53 years, Imogene Banks Caudell, and by his daughter-in-law, Tricia Timmers Caudell. He is survived by one daughter, Claire Mann, and her husband David; two sons, Russell and David Caudell; brother-in-law, Marion Banks and his wife, Linda Webb Banks of Elberton; five grandchildren, two great grandchildren; numerous nieces and nephews; and a devoted friend, Shelby Beavers Pryor. The family received friends on Saturday, March 3, 2018 at Northside Chapel Funeral Directors in Roswell. A funeral service followed at 12:00pm. For those who wish, in lieu of flowers, donations can be made to First Baptist Church of Roswell, Nails Creek Baptist Church, or to the Roswell Lions Club. For the compassion, love, and care, the family thanks: Alberta Anderson, Jackie Covan, Salma Furbush, JoAnn Harland, Jenny Howard, the late Dinah Mahone, Alexander Ortiz, Jewell Russell, Bernard Sarpong, and Capstone Hospice. Announcement courtesy of Hicks Funeral Home & Cremation Services at the family’s request.

Charles Winfield Caudell, age 88, died at his Roswell home on February 25, 2018, after an extended illness. Charles, known to many as Travis, was born on the family farm in the Nails Creek community of Banks County, Georgia on May 10, 1929.... View Obituary & Service Information

The family of Mr. Charles Winfield Caudell created this Life Tributes page to make it easy to share your memories.

Charles Winfield Caudell, age 88, died at his Roswell home on...

Send flowers to the Caudell family.