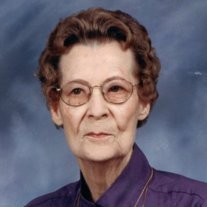 Cecile Frances Adams Harper, 96, of Elberton, Georgia passed away October 5, 2013 at her home. She was the beloved wife of the late Omer Arthur “Dutch” Harper. A native of Elbert County, Mrs. Harper was the daughter of the late George Cason Adams and Sallie Cordell Adams. She was the oldest direct descendant of Joe and Georgia Adams of the Coldwater community. Mrs. Harper was a graduate of Young Harris College and Georgia State College for Women. She began her teaching career at Rock Branch School, then taught at Centerville and Beaverdam Schools. She retired in 1980 with a total of 31 years in the Elbert County School System. After her retirement, she enjoyed gardening, reading, and traveling. Mrs. Harper was a member of Concord United Methodist Church where she taught Sunday School until the age of 95, and was a member of the United Methodist Women since 1938. Mrs. Harper was a member of the Stephen Heard Chapter of the Daughters of the Amercian Revolution, the Georgia Retired Educators Association, and the Elbert County Senior Citizens Advisory Board. She delivered Meals-On-Wheels in her 80’s and was a Literacy Volunteer. She was a past member of the Foothills Iris Society and the American Iris Society. She entered her iris blooms in shows and often won first place. She shared her flowers with many friends and neighbors. Cecile was a loving mother, a faithful friend, and is remembered by so many former students as a favorite, caring teacher. Surviving are her daughters: Christine H. VanWey and her husband Ronnie, and Rita Harper, all of Elberton; and a grandson, Joshua Harper and his wife Lisa, of Texas. She is also survived by great-grandchildren: Jedediah Harper and Katarina Harper, both of Texas; and a special niece and her husband, Kathy and Boyd Long of Grovetown, Georgia. In addition to her husband, Cecile was preceded in death by a son, Donald George Harper; and a brother and sister-in-law, Joe W. and Sara Adams. Funeral services were held on Tuesday, October 8, 2013 at 11:00 a.m. at the Concord United Methodist Church, with Rev. Bryan Smith officiating. Burial followed in the church cemetery. A reception and time of visitation was held afterwards in the church Fellowship Hall. Pallbearers were Jerry Adams, Kenneth Ayers, Gary Booth, Charlie Bush, Bobby Eavenson, and Charles Truitt. Memorials may be made to the Concord United Methodist Church, 2503 Harmony Rd., Elberton, GA 30635. You may express condolences to the family at www.hicksfuneral.com or by mail at 1462 Double Bridges Rd., Elberton, Georgia 30635. Arrangements for Mrs. Cecile Adams Harper were in the care of Hicks Funeral Home, Elberton.

Cecile Frances Adams Harper, 96, of Elberton, Georgia passed away October 5, 2013 at her home. She was the beloved wife of the late Omer Arthur &#8220;Dutch&#8221; Harper. A native of Elbert County, Mrs. Harper was the daughter of the late... View Obituary & Service Information

The family of Mrs. Cecile Adams Harper created this Life Tributes page to make it easy to share your memories.

Send flowers to the Harper family.