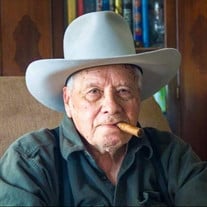 Bobby Lee “BL” Pitts, of Elbert and Oglethorpe Counties, passed away peacefully from complications related to the Covid-19 virus on Monday, November 9, 2020, surrounded by loved ones, at the Pitts family farm. He was 92 years old. Bobby was born on September 24, 1928 in Point Peter, Georgia, to Lillian Chastain and William Cary Pitts. He grew up working the land alongside his family in the Palmetto Community. Bobby was a loving husband, father, grandfather, great-grandfather, brother, uncle, friend, a successful businessman, and a proud Marine. Like his brothers, he answered the nation’s call when his country needed him most. In 1945, the invasion of Japan seemed all but imminent – an invasion even larger than D-Day; and yet, Bobby, at only 17 years of age, joined the Marine Corps. The eventual surrender of Japan would divert his war effort to China in the waning days of WWII. He regarded his service to country second only to his love of family. Semper Fidelis. Bobby returned home from the war, joining the National Guard. He met the love of his life, Margaret “Polly” Algood Pitts, in Elberton, Georgia. Bobby and Polly enjoyed nearly 66 years of marriage until Polly’s death in the spring of 2015. They were the proud parents of five, grandparents of fourteen and great-grandparents of twenty (with two more arriving soon). Nothing thrilled Bobby more than his family. In his later life, his favorite pastime was calling and checking on everyone, especially his grandchildren and great-grandchildren, nieces and nephews. He was grateful to have such a close and loving family. Bobby began his career as a grocer and businessman with the Winn-Dixie corporation. Over more than twenty years he successfully opened Winn-Dixie stores across Georgia and Alabama. In the early 1970’s, he left Winn-Dixie to start his own chain of grocery and convenience stores. By the mid-1980’s, the Minit-Save corporation had more than two dozen locations across north Georgia. As a testament to his character, Bobby never once missed a payment to a supplier or creditor in his more than 40 years of private business. He was a man of his word. Bobby was predeceased by his wife Polly, parents William Cary and Lillian Chastain Pitts, his brothers Alvin and Melvin Pitts, his sister Catherine Pitts Callaway, his children Dennis Pitts and Debbie Pitts Hansford, son-in-law Ted Hansford, and great-grandson Parker Cash. He is survived by his children Mike and Michelle Pitts, Dr. Robert and Patti Pitts, and Lisa Pitts Teague, his sisters Doris Graham Callaway and Jeannie Pitts Fincher, sister-in-law Betty Pitts, his grandchildren and great-grandchildren, and numerous nieces and nephews. A private family graveside ceremony was conducted at Forest Hills Memorial Park, Elberton, Georgia. His grandsons served as pallbearers. Memorial contributions may be made to the Elberton Christian Church, 1128 Calhoun Falls Hwy., Elberton, Georgia 30635. Arrangements for Mr. Bobby Lee “BL” Pitts were in the care of Hicks Funeral Home and Cremation Services.

Bobby Lee &#8220;BL&#8221; Pitts, of Elbert and Oglethorpe Counties, passed away peacefully from complications related to the Covid-19 virus on Monday, November 9, 2020, surrounded by loved ones, at the Pitts family farm. He was 92 years old. Bobby... View Obituary & Service Information

The family of Mr. Bobby Lee "BL" Pitts created this Life Tributes page to make it easy to share your memories.