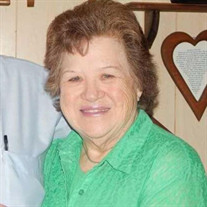 Mrs. Betty Jean Kelly Beri, 82, of Elberton, Georgia passed away Sunday, August 8, 2021 at her home. A native of Elberton, Betty was the daughter of the late Mack Gordon and Ruth Fields Kelly. She was the beloved wife of Louis Beri, with whom she had celebrated 61 years of marriage. Betty worked throughout her years as a technician at Prestolite and in sales at Pic-N-Pay Shoe Store. She was a faithful and devoted member of Francis Asbury United Methodist Church. She was a member of the Cora Harris Sunday School Class, and also served as Treasurer for the church. Betty was also very active in the community as a volunteer for the Elbert County Recreation Dept. and The Salvation Army as well. Betty was honored to be chosen as the recipient of the Artillery Order of Molly Pitcher from the United States Army, which recognizes individuals who have voluntarily contributed in significant and meaningful ways to the improvement of the Field Artillery Community. In addition to her husband, Louis Beri, Betty is survived by her children: Michael Beri and wife, Dana, of Elberton, Patrick Beri and wife, Angela, of Charleston, TN, and Linda Beri Woodard of Clearwater, FL. She also leaves behind 12 grandchildren and 22 great-grandchildren, several nieces and nephews, and other extended family members. One of Betty’s granddaughters, Katie Woodard, lovingly and faithfully served as Betty’s caregiver over the past few months. Betty was preceded in death by her parents, a brother, four grandchildren, and one great-grandchild. A service to celebrate Mrs. Beri’s life was held on Tuesday, August 10, 2021 at 2:00 p.m. at Francis Asbury United Methodist Church, with Rev. Calvin Ward and Rev. Tim Savelle officiating. A time of visitation for family and friends was held on Monday evening, August 9, 2021 at Hicks Funeral Home & Cremation Services from 6:00-8:00 p.m. Interment followed at Forest Hills Memorial Park with Kevin Kelly, Jordan Beri, Patrick Beri, Jr., Matthew Beri, Brandon Beri, Daniel Beri, Barry Witcher, Nick Born, and Jerry Patterson serving as pallbearers. Mr. Tony Lopez, along with The Cora Harris Sunday School Class, served as Honorary Pallbearers. Memorial contributions may be made to the First Baptist Church Ramp Ministry, 132 Heard St., Elberton, or to Francis Asbury United Methodist Church, 1016 Ruckersville Rd., Elberton, GA 30635. Arrangements for Mrs. Betty K. Beri were in the care of Hicks Funeral Home & Cremation Services of Elberton.

Mrs. Betty Jean Kelly Beri, 82, of Elberton, Georgia passed away Sunday, August 8, 2021 at her home. A native of Elberton, Betty was the daughter of the late Mack Gordon and Ruth Fields Kelly. She was the beloved wife of Louis Beri, with... View Obituary & Service Information

The family of Mrs. Betty Kelly Beri created this Life Tributes page to make it easy to share your memories.

Send flowers to the Beri family.