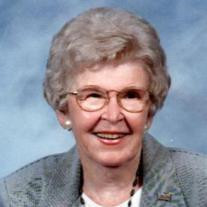 Beth Brown Safrit Edwards of Winterville, GA, formerly of Elberton, GA, and St. Simons Island, GA, entered into rest on June 25, 2012 after a period of declining health. She was preceded in death by her beloved husband of 55 years, Joe B. Edwards, who died in 1997. Born June 9, 1921 in Rowan County, North Carolina, she was the oldest child of the late Ethel Brown Safrit and Charles Banks Safrit. She was preceded in death by two younger brothers, Lewis E. Safrit and Charles B. Safrit, Jr. Mrs. Edwards is survived by her daughter, Jane, and son-in-law, Craig Cleveland, of Winterville; and the sunshine of her life, her granddaughter, Stephanie Michelle Cleveland, of New York, NY. She is also survived by her youngest brother, Hugh James Safrit; a special sister-in-law, Betty Safrit; and a beloved niece and namesake, Beth Wallis; as well as numerous nieces and nephews. She will also be remembered by many of the residents and staff members of Morningside Assisted Living of Athens, GA, where she enjoyed volunteering before becoming a resident since 2008. While there, she was treated with love, compassion, and dignity. Her greatest joy in life was being a loving wife, mother, mother-in-law, grandmother, friend, and “Aunt Beth” in every neighborhood in which she lived. The family will receive friends at Hicks Funeral Home, Elberton, GA from 10:00-11:00 a.m. Wednesday morning prior to the service. The service will be at Holy Trinity Lutheran Church, Elberton, GA at 11:30 a.m. where she was proud to be the oldest living charter member. A private entombment service will follow at Forest Hills Memorial Park. A special thank you from the family is given to Hospice Advantage and Athens Infusion, and to her three loving caretakers: Rose Johnson, Ann Njoroge, and Gloria Wright. In lieu of flowers, those desiring may make memorial contributions to Holy Trinity Lutheran Church, 20 Forest Ave., Elberton, GA 30635 in memory of Beth S. Edwards. Online condolences may be expressed to the family at www.hicksfuneral.com. Hicks Funeral Home is honored to be serving the family of Mrs. Beth Safrit Edwards.

Beth Brown Safrit Edwards of Winterville, GA, formerly of Elberton, GA, and St. Simons Island, GA, entered into rest on June 25, 2012 after a period of declining health. She was preceded in death by her beloved husband of 55 years, Joe B. Edwards,... View Obituary & Service Information

The family of Mrs. Beth Safrit Edwards created this Life Tributes page to make it easy to share your memories.

Send flowers to the Edwards family.