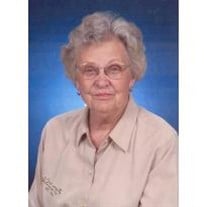 Mrs. Azalee Anderson McMullan, age 81, of 3469 Ruckersville Road, Elberton, widow of the late Joe Tom McMullan, passed away on Monday, March 1, 2010 at Elbert Memorial Hospital. Born on June 25, 1928 in Elbert County, she was the daughter of the late Rueben and Dora Anderson. She was retired as a Kindergarten Paraprofessional from Falling Creek Elementary School and was a member of the Rock Branch Baptist Church. In addition to her parents, she is preceded in death by her husband, Joe Tom McMullan; and brothers, Clifton Anderson, John Moses Anderson, Martin Anderson, and Wade Anderson. Survivors include her daughter and son-in-law, Ellen and Kenneth Dye; granddaughters, Allyson Dye and Lauren Dye, all of Elberton; and sisters, Hannah Herlong of Greenwood, SC, Mary Agnes Ward, and Hazel Smith, both of Elberton. Several other relatives and friends also survive. Funeral services will be held on Thursday, March 4, 2010 at 3PM at the Chapel of Hicks Funeral Home. Reverend Ken Wright and Reverend Ed Sayer will officiate, and burial will follow in Elmhurst Cemetery. The family is at the home, 3469 Ruckersville Road, and will receive friends from 7-9PM Wednesday evening at Hicks Funeral Home. In lieu of flowers, memorials may be made to the Rock Branch Baptist Church Family Life Center or to the Joe McMullan Memorial Vocational Scholarship Fund in care of the family. Hicks Funeral Home is in charge of arrangements for Mrs. Azalee Anderson McMullan.

The family of Azalee Anderson McMullan created this Life Tributes page to make it easy to share your memories.

Send flowers to the McMullan family.