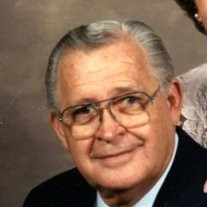 Allen Perry Stone died at his home in Elberton, Georgia on Saturday, November 30, 2013. Born June 13, 1920 in his parent’s home on North Oliver Street, he was the son of the late William Perry Stone and Mary Smith Stone. Married on August 27, 1946, he is survived by his wife of sixty seven (67) years, Iola S. Stone. Mr. Stone was an only child. A graduate of Elberton High School, he proudly attended First Presbyterian College in Clinton, South Carolina. A veteran, Stone received training at Camp Wheeler and served in the United States Army in the South Pacific during World War II. He was honorably discharged following treatment in hospitals in New Guinea, Australia, and the United States. Stone was an officer for the Georgia State Patrol posted in Washington and Gainesville. Later, he was employed as an Assistant Cashier by the Florida National Bank, Lakeland, Florida, and then for First National Bank in Elberton. The Georgia Department of Revenue became his final employer and he was promoted over time to Area Supervisor, District Supervisor, and State Supervisor with primary responsibilities related to the enforcement of laws related to alcohol, tobacco and firearms. Governor Lester Maddox asked him to create an undercover operation for enforcement of laws related to alcohol issues with wholesale and retail businesses, gambling, and other related issues. This assignment lasted for eight (8) years. Stone retired in 1987 as management of the Department’s Auditing Division which monitored wholesale alcohol distributors in Georgia as well as companies doing business in Georgia from seventeen (17) other states and Canada. A Christian man, Stone was a lifelong member of First Presbyterian Church, Elberton, Georgia. He was a member of the Peace Officers Association of Georgia. Throughout his life, he was a strong supporter of the men and women who serve communities through public safety and law enforcement. He was a life member of Philomathea Lodge #25 of Elberton and the Yaarab Shrine Temple of Atlanta. In addition, he was a member of the Lexington American Legion Post 123, the Elberton Veterans of Foreign Wars (VFW) Post 5456, Elberton Elks Lodge 1100, and the Elberton Moose Lodge 1099. A graveside Funeral Service was held on Sunday, December 1, 2013, 2:00 p.m. at Elmhurst Cemetery in Elberton. Hicks Funeral Home is in charge of the arrangements.

Allen Perry Stone died at his home in Elberton, Georgia on Saturday, November 30, 2013. Born June 13, 1920 in his parent&#8217;s home on North Oliver Street, he was the son of the late William Perry Stone and Mary Smith Stone. Married on... View Obituary & Service Information

The family of Mr. Allen P. Stone created this Life Tributes page to make it easy to share your memories.

Allen Perry Stone died at his home in Elberton, Georgia on Saturday,...

Send flowers to the Stone family.