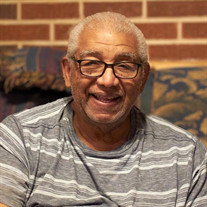 Dr. Albert T. Smith M. D., son of the late Albert T. Smith, Sr. and Willie Lorraine Smith was born in Augusta, Georgia on December 18, 1948 and departed this life on November 24, 2021. Dr. Smith received his early education in the public schools of Elberton and graduated from Blackwell Memorial High School. He received the Bachelor of Science Degree from Morehouse University in 1971 and the Degree of Doctor of Medicine from Hahnemann School of Medicine in 1976 and MPH from the University of Pittsburgh in 1994. He was the father of six children: Albert T Smith III, Jonathan Nicholas Smith, Ashley Lynne Smith, William Alexander Smith, Ariele Rosalind Smith, Benjamin Elijah Smith and grandfather of Kalynne Ariane Smith, Sage Elizabeth Smith, and Grand-pups Bayli, Cupcake, Bruiser, Chocolate, Sugar, Chomper 1.0, Chomper 2.0. Doc was an avid golfer and loved playing pinnacle. He was a track coach for the Nadia Track Club of Pittsburgh. He had a lovely singing voice and he used it to glorify God as he sang solos and with various church and community choirs. He was predeceased by his parents . In addition to his children, he leaves to cherish his memory Brenda Smith (sister) family and friends. "He will wipe away every tear from their eyes, and death shall be no more, neither shall there be mourning nor crying nor pain any more for the former things have passed away." Revelation 21:4 Funeral services for Dr. Albert Smith Jr. were held Saturday, December 4, 2021 at 3:00p.m. in the chapel of Hicks Funeral Home. The family received friends at Hicks Funeral Home on Friday, December 3, 2021 from 6:00p.m. until 8:00p.m., and on Saturday, December 4, 2021 from 1:00p.m. until 2:45p.m. Arrangements for Dr. Albert T. Smith, Jr., MD. were in the care of Hicks Funeral Home & Cremation Services of Elberton.

The family of Dr. Albert T. Smith Jr., MD created this Life Tributes page to make it easy to share your memories.